Mike Likes It, but Would Your Team Vote for an Open-Office Plan?

By Antony MichelsFebruary 20, 2020No Comments 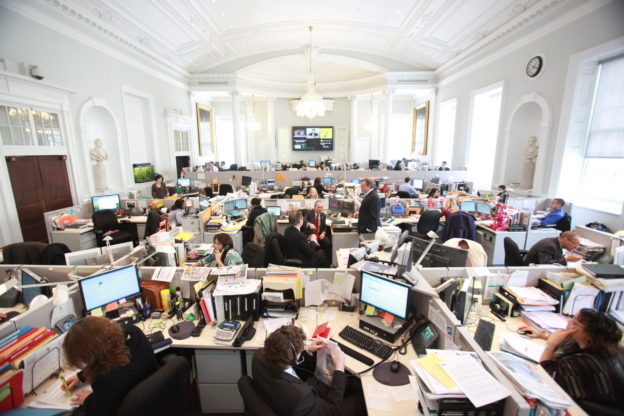 Open-office plans like the one Mike Bloomberg adopted at City Hall have fans and skeptics. Where do you stand (sit)?

Presidential hopeful Mike Bloomberg in December tweeted the picture above of the “bullpen” office he had as New York City mayor and wrote, “I’ll turn the East Room into an open-office plan, where I’ll sit with our team.”

No one can say if that will ever happen, of course. But the subject of open-office plans definitely sparked interest at a NeuGroup meeting this month when one member asked how others organize their office space.

Breaking down walls. One member surprised peers by saying that within a few months his company will move completely to open space, with no walls between people, and that arrangement will apply also to top executives, including the CEO, CFO and legal counsel.

Backlash. The concept of open-space seating has been around for decades, especially among technology companies that have viewed open-space environments as conducive to exchanging ideas.

Alternatives. Another meeting participant’s company had expressed interest in open space, but for now employees remain in cubicles with low walls, and managers have offices.

Still, meeting members suggested most treasury departments remain conservative on the seating front, with team members sitting in cubicles with high walls—a “legacy thing,” as one person put it.